Tig is Puff's main love interest and a supporting character in YFMTS.

Tig's only appearance in phase one is as a teenager in Tig Ol' Bitties. She is shown as having ginger hair in pigtails, orange eyes and pink lipstick. She wore a white cropped shirt, a green skirt, white socks and shoes in the same shade of green. She has big boobs, although it is later revealed that she stuffed her shirt for attention.

In phase two, she shows the same core design of ginger hair and green and white clothing, but with a few changes. Instead of pigtails, her hair is now left down and she wears a white blouse with a few buttons undone to reveal cleavage, a similar green skirt, the same shoes and socks and she sometimes carries a dark green purse. Her eyes are now blue instead of orange. It is unknown if she still stuffs her shirt or not.

Tig is shown to be sweet and kind, but can get angry if pushed far enough. She tries to see the best in people, as seen in YFMTS #11 where Puff doesn't do a very good job at hosting a date but she still tries to enjoy it. She seems to care about her appearance greatly as well, as she was quick to freshen herself up after Puff insulted her. 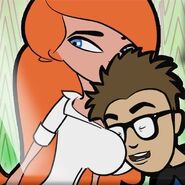