QUARANTINE is episode seven of YFMTS, in which Puff attempts to vaccinate DeeJay and Axel with chickenpox, but it quickly backfires. 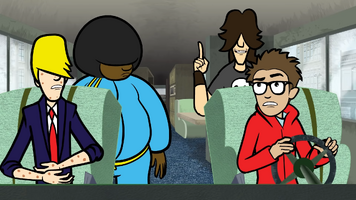 The episode starts with Benatar sat at the front of the bus, covered in spots. Puff is quick to express his disgust for it, asking why he was itching himself so much. Benatar explains that it was after they played at a child's birthday party. Puff says that children are "little porn stars," and that they spread disease, and that he'd guess it was chickenpox if he hadn't already had it. Benatar quickly debunks that, saying he's never had chickenpox, and DeeJay chips in saying he hasn't had it either. Axel says that he's had poison ivy, before Puff expresses his surprise that none of them have had chickenpox. He tells the two that they need to catch chickenpox, to which they disagree. Axel says that the only disease he wants to catch is elephantiasis on his penis, and it quickly cuts to a scene called "Axl's Capsule," where he explains what elephantiasis is. 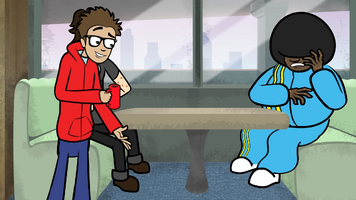 Puff tries to give the two a gross-looking mimosa that Benatar's been "nursing," to which they react disgustedly. It cuts to a shot of Benatar laying in bed with multiple used tissues by his pillow, which Puff picks up with tongs and places in front of Axel and DeeJay's faces, then seals the bus door shut. The next day, DeeJay and Axel are seen sitting at the table in the bus covered in spots, scratching themselves profusely. Puff walks up and greets them, pleased with what he's done, and asks how they're doing. DeeJay says that they're not doing well and that it's the last time he sleeps behind the wheel, although according to Axel, he's said it before after hitting a child. Axel looks in a handheld mirror and loudly announces that the two have caught chickenpox, which DeeJay immediately blames on Puff. The two bang on the windows after discovering that they've been sealed in, and Puff says that they're going to be under his care until they recover. 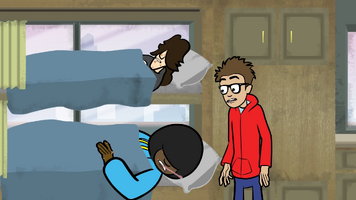 The next shot is of Axel and DeeJay in bed, with Puff reading their temperatures on a thermometer. DeeJay is relieved that Puff didn't mistakenly use the thermometer, which Benatar reacts to, surprised that he used it wrong. The two react disgustedly, and begin plotting how to get Puff back after he walks away, with Axel suggesting that they fake their deaths. Puff returns, and is shocked to see that he supposedly killed his bandmates. 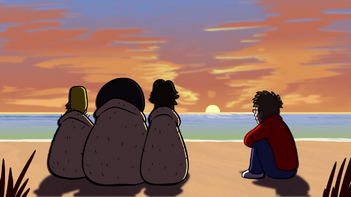 DeeJay says that they want to see one last sunset before they "die," and it cuts to the four of them sitting on a beach, watching the sun, with Axel, Benatar and DeeJay wrapped in blankets. Puff asks if "he" is here to take them to the other side, to which Axel responds bluntly, saying that they're not actually dying. Puff is relieved to know that he didn't manslaughter his bandmates, and flops over on the sand. The three appear, standing over him, when Benatar points out that Puff has chickenpox, and that he hasn't really had it before. Puff says they're lucky that he didn't have to give them herpes, which Axel responds to triumphantly, saying he's already got it. He tells DeeJay, who reacted confusedly, to back him up, and the episode ends.